Emotions-as-Effect Theory: The Linguistic Semantics of Emotional vs. Cognitive Regulation 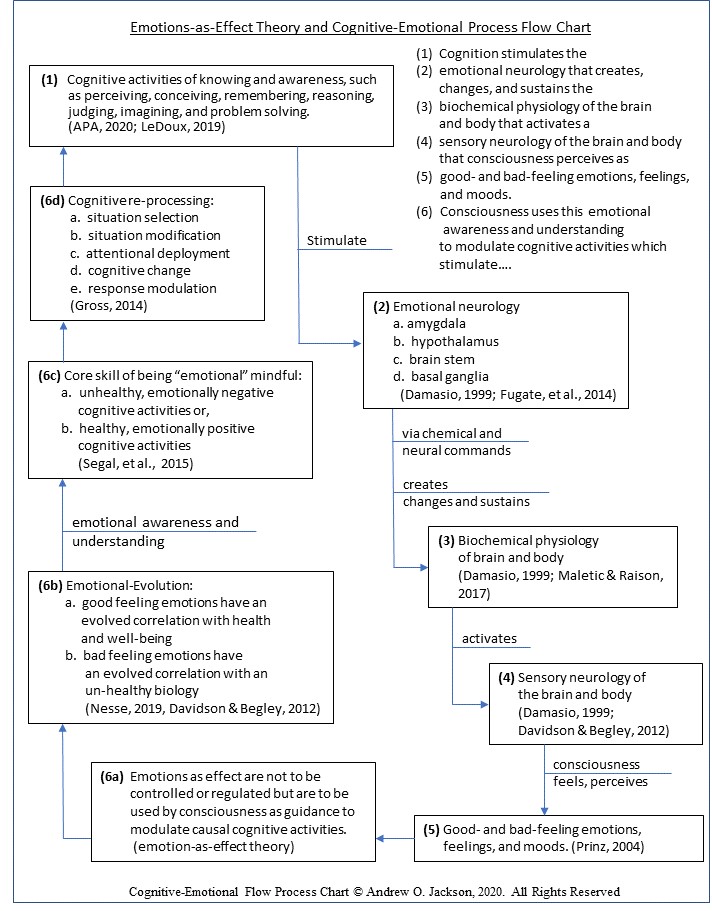 What if emotions are more than a stimulus for song, poetry and drama

where poets bend and sway their audiences’ emotions up and down,

as a roller coaster excites and thrills for the pleasure, or dismay,

of its breathless riders?

“Goddess, sing me the anger, of Achilles, Peleus’ son, that fatal anger that brought countless sorrows on the Greeks and sent many valiant souls of warriors down to Hades, leaving their bodies as spoil for dogs and carrion birds: for thus was the will of Zeus brought to fulfilment” (Homer, 800-700/2009). With these beginning words written almost 3000 years ago, Homer’s Iliad linguistically sabotaged hundreds of millions of years of emotional evolution. The civilized arena was staged for aberrant emotion driving destructive behavior. In turn, this destructive behavior arising from emotional dysregulation and disorder required emotional regulation and control. Emotions-as-effect theory reconstructs the evolutionary bases of good- and bad-feeling emotions as the perception, by consciousness, of a biochemical physiology within the body and the brain precipitated by an evolved and nurtured cognitive neural circuitry. Emotions, feelings, and moods are perceptions of an internal state of biology precipitated by cognition. Homer’s emotions, feelings, and moods are a carefully nurtured neurolinguistic cognitive construct of the mind. Contrary to the linguistics of Homer, emotions are not causal, and they are neither destructive nor constructive; rather, they are indicators of the presence of very real destructive and constructive – and causal – cognitive behaviors. The correlations among (1) cognition, (2) a healthy, vital, and robust biochemical physiology of the brain and body, (3) good- and bad-feeling emotions, and (4) consciousness are a result of millions of years of evolutionary survival for the health and well-being of the individual. The question is, how will today’s ever-changing technical and political cultures and societies understand, nurture, and develop these same necessary correlations?

How long will the academic institutions of education, language, linguistics, literature psychology, and philosophy continue the instruction, edification, and liability of an erroneous emotional/cognitive dynamic regulatory theory based in a 3000-year-old literary and religious linguistics when there are yearly, nearly 800,000 suicide deaths worldwide (W.H.O., 2019), millions of other people are being put through a child-to-prison pipeline where incarcerating conditions only amplify their psychological injuries, and indiscriminate “random” shootings continue with no review of the psychological environments that are fostering all of these atrocities and that are oblivious to emotions’ evolutionary design?  Lack of personal and academic questioning and review of psychological and pharmacological emotional dysfunction theory would only add to the misfortune of these children of a lesser God (Medoff, 1979).

The “science” of emotional regulation kept me imprisoned in a living hell for nearly twenty years.  The “logic” of cognitive regulation through emotional guidance set me free.   Emotions and feelings have evolved as a fantastic and wonderful personal bio-feedback system where emotions work in a symbiotic harmony with mind, body, and consciousness for the health, wealth, and well-being of the individual.